Over 170 members, Trustees and staff travelled from across England and Wales to Southampton to attend the Annual General Meeting and General Court of the Royal Masonic Trust for Girls and Boys. Those present heard a series of informative and enjoyable presentations from the Trust’s President, Mike Woodcock, and Chief Executive, Les Hutchinson, as well as other members of Council and staff. While several important items of business were conducted, the most significant was a vote on the proposed restructuring of the Trust, first announced to members at the Special General Court held at the Royal Masonic School in April. The proposal was to consolidate the activities of the four existing central Masonic Charities and create a new overarching charity called the Masonic Charitable Foundation with one President, Chief Executive and Trustee Board and a single staff structure. The Masonic Charitable Foundation will help to reduce current duplication of effort and improve efficiency with simpler and streamlined support for beneficiaries. You can read the full script of the meeting here to find out more about the proposals. 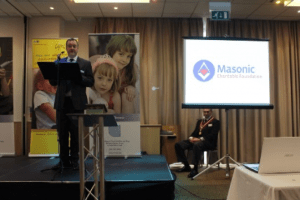 After a lively question and answer session, members voted unanimously in support of the proposals. Council are now able to take the next important steps in the consolidation process.
Over the past 227 years, the RMTGB has continually evolved to provide the best possible support for its beneficiaries and to improve the way it interacts with and benefits the Craft and society in general. The Masonic Charitable Foundation will ensure that Masonic charity not only survives, but thrives in the years ahead.
For more information about the Masonic Charitable Foundation, visit: www.mcf.org.uk.