The 2016 Festival in aid of the Royal Masonic Trust for Girls and Boys came to a spectacular conclusion on Saturday 22nd October at the Bournemouth International Centre. 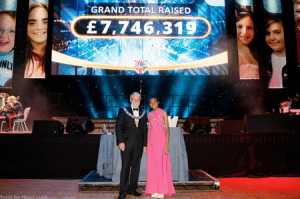 Over 700 brethren, wives, family and friends attended the sumptuous Gala Dinner, during which they were entertained by a variety of acts, including the Royal Marines Association Concert Band, the Southern Union Chorus and Jasmine Elcock of ‘Britain’s Got Talent’ fame who was herself helped by the charity.

Jasmine, who is only 14 years old, performed two songs and received a standing ovation, after which she unveiled the final figure raised, which was £7,746,319. A record amount for any festival ever held!

Also present on the evening were many civic dignitaries, including the Deputy Lieutenants of Hampshire and the Isle of Wight, the Mayor of Bournemouth and the Chairman of New Forest District Council. The Assistant Grand Master, Sir David Wooton also attended the event. 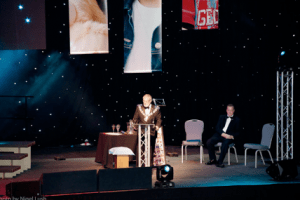 In response to his toast the Provincial Grand Master and Festival President, RW Bro Mike Wilks thanked all the Brethren of the Province for their dedication and hard work in making the Festival Appeal such a success. He further commented:

“The amount raised is staggering and will be enormously beneficial to the charity and the children and families which it supports. In addition to this amount, throughout the 6 year period of the Appeal, our brethren have continued to support local charities in the community across Hampshire and the Isle of Wight and have donated in excess of £200,000 each year to these local causes. As Freemasonry celebrates its Tercentenary in 2017, this support of local charities will continue and increase and I am immensely proud of the brethren’s achievement.”